Why I Support the NYC Soda Ban

Ever since news broke last week about the New York City’s ban on the sale of large sodas (anything over 16 oz), I’ve been surprised by the reactions of those closest to me. I, being someone that has just started a graduate program in public health and plan to work in obesity prevention research and policy making, immediately supported the ban and applauded NYC and Mayor Bloomberg. Yet many of the people who I’m closest to and love dearly (and who I know to be smart, logical, and compassionate people) are against it. They don’t get the reasoning behind it, feel that it’s stupid, feel that it’s pointless, feel that it’s constrictive. I disagree, and here is why…

From what I gather, there are two main camps that have issues with the soda ban—people who drink soda and feel that they are being imposed upon, and those who disagree with the regulation on principle and believe the government shouldn’t restrict individual choice.

To the soda drinkers:

First off, I know you aren’t stupid, and I know that you know that soda isn’t good for you. But just in case, here are a few highlights to remind you why you should maybe think about switching to water…

Okay, so let’s say you know all of that, and you still want to drink a soda, and you just can’t/don’t want to limit yourself to a smaller portion size…

With the NYC Soda Ban, there is nothing stopping you from getting TWO 16 oz bottles of soda. Or you can buy a 6 oz drink at McDonald’s and get a refill. However, both of those options requires you, the consumer, to make the CONSCIOUS decision to get more. Making the split decision to upgrade to a large soda instead of a medium while at the drive thru is too simple to do, especially when you are able to do so for only pennies more.

Having to buy two separate drinks also gives you a LOGICAL and HEALTHY point at which to stop drinking! Instead of having a huge soda in front of you that you start mindlessly drinking until it’s all gone, you will have to consciously get up and go get a refill or open up a second bottle. At that point you can evaluate your consumption and decide whether to drink more. One of the great things about this regulation is that it makes people who will still drink soda more aware of how much they are drinking. It isn’t saying don’t drink—it’s saying drink LESS.

To the second camp, the people who think that government should stay out of the free market and that people should be able to buy what they want to buy, let’s imagine a scenario, that although a tad silly, I hope proves a point:

Today, a fair amount of people go the gas station from time to time and buy a standard pack of gummy bears to eat. An average gas station size bag of gummy bears weighs approximately 5.3 oz. Most people don’t eat gummy bears every day-- it’s considered a treat, right? You might mow down a bag every so often, but probably not every day, and definitely not multiple times every day. 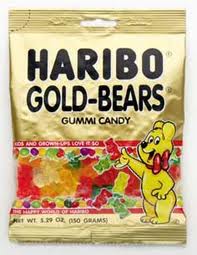 Now imagine that by 2040, nearly half of the US population eats not only a bag of gummy worms everyday, but the equivalent of 3 bags of gummy worms (15 oz worth), all sold in ONE BIG BAG.  And some people really, really like gummy bears and buy a huge bear each day that weights 80 oz. 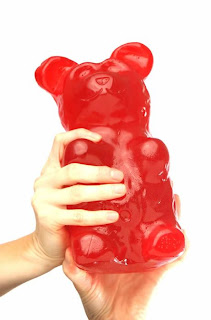 Some people may only want a 5 oz bag of gummy bears, but have difficulty finding stores that sell such a small portion. So they get a larger bag and find themselves eating the whole thing because it’s just there. Or, maybe they go into a store wanting a 20 oz bag, but find they can get 30 oz for only pennies more (or maybe even the same price), so they upgrade to the larger size. Again, they didn’t really want the extra gummy bears, but they end up eating them because they were essentially free (and let’s face it, they taste amazing).

Now, I think we can all agree that if this was America’s current situation, it would be time to curb the damn gummy bear consumption in this country. There would be no godly reason that someone should be eating that many gummy bears every single day, let alone that someone should even be able to purchase a 80 oz gummy bear. If someone really wants that much gummy bear, they can buy multiple bags, and the Gummy Bear Industry wouldn't be any worse off for it.

Unfortunately, the current soda situation in America is not too far off from the scenario above (and actually, it’s a lot worse situation since soda doesn’t even fill you up like gummy bears do). The gummy bear ounces above are pretty consistent with the soda ounces that are ingested by the average American, both in the past and today. The original McDonald’s fountain drink served in 1955 was 7 oz (which is smaller than the kiddy size served today). A McDonald’s small today is 16 oz, a medium is 21 oz, and a large is 32 oz. Currently, the average amount of soda drank per capita, per day is 15 oz. And 7/11’s current Double Big Gulp is 50 oz—although they once sold a Team Gulp size that topped out at a crazy 128 oz.

In our pretend Gummy Bear obsessed world, it would be time for the government to step up, look out for its citizens, and put an end to the craziness. Instituting a law like the NYC’s Soda Ban wouldn’t stop people from eating gummy bears (it wouldn’t even aim to do so), but it would ensure that portion sizes would be more appropriate, and the healthier choice would become an easier choice. True, people could no longer buy a World’s Largest Gummy Bear or even a 15 oz bag worth, but are they really being hurt by that? They would still have access to smaller 5 oz bags of gummy bears, and those who really wanted to ingest more gummy bears could absolutely do so by buying multiple bags. However, in order to do so, they will have to make a conscious decision to eat more, and they will have to pay more for it-- neither of which I believe is too much to ask.

The NYC Soda Ban isn’t perfect, and it isn’t a cure-all. Yes, people will have to make adjustments to the way they do business and the way they live their lives, but I don’t think that should prevent NYC from trying a very worthwhile policy initiative. In addition, there will have to be a lot of other policies and health education programs implemented to truly make a different in the NYC obesity rates, but a soda ban is one small piece of the puzzle that aims to improve one huge risk factor of obesity.

I know I haven’t given you any hard facts or quoted any research that shows that a soda ban will work, but it exists if you look for it. I didn’t want to present scientific evidence however, because I think to the average person who doesn’t really give a rip about science, and just wants to be able to drink a damn soda, it’ll be lost. Which is absolutely okay. I wholeheartedly think the fundamental reason why we have such an issue with obesity/chronic disease epidemics and why we struggle to beat it is that we have made health too hard to understand, too difficult and confusing to achieve. I hope to change that in some way in my career as a public health professional. If you have questions or rebuttals, feel free to ask/comment/yell. Discourse is what this country needs to solve our nation’s issues, along with compassion and common sense.
1 comment: 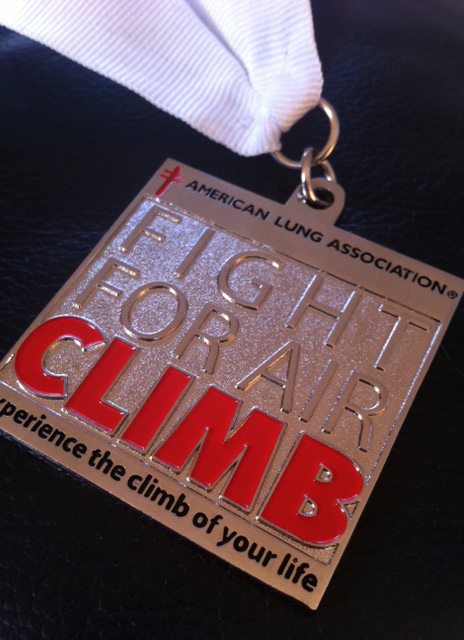 I signed up for this charity climb after my friend Heather expressed interest in training for it together. There was a minimum donation that was required to climb, which was fairly easy for me to accomplish. I got an email a few days prior to the climb with my climb time, which was mercifully late in the day. Check-in was super simple, it took only a few minutes, and it was really well organized. Only complaint is that they ran out of small t-shirts and most of the food by the time we climbed.

They took climbers to the stairs in groups of 20 or so, and then started everyone up the stairs 10 seconds apart. That helped keep congestion to a minimum, however the stairwell was A LOT narrower than I expected it would be, so it was still hard at times to pass people. It was also really muggy and hot, but you can't really fault them for it since it was an unseasonably warm March day, and stairs just aren't built with proper ventilation for physical activity. Lots of people were having trouble breathing, and I quickly realized after a few flights that I would be walking, not running, the stairs. Volunteers were great, and had cheers, water, and fans ready for us when possible.

Personally, the climb seemed to go by really quickly-- I was surprised to find it only took me 12 minutes to finish. I guess I expected it would take a lot longer for some reason. My pace seems SUPER slow though compared to the winning male who finished in 6 minutes... and then he climbed it 5 more times... Crazy! On the other end of the spectrum, I saw a fair amount of people climbing with inhalers or canes, which was also very inspiring to me.

Overall, I HIGHLY recommend trying a climbing event sometime, because it's a unique challenge, and if it's for a charity, that's an added bonus! Personally, I probably won't do this event again, just because it was too long of a drive to Milwaukee for just 12 minutes of event.

-Being healthy shouldn't be difficult and it shouldn't be expensive
-A healthy home cooked dinner always trumps fast food
-Paying extra for organic is worth it
-Dessert and wine are a part of a healthy diet
-If you've never run in the rain, you've never run
-Nights in are better than nights out
-Everyone is an athlete, most of us just haven't realized it yet
-Laughter and exercise are the best medicines